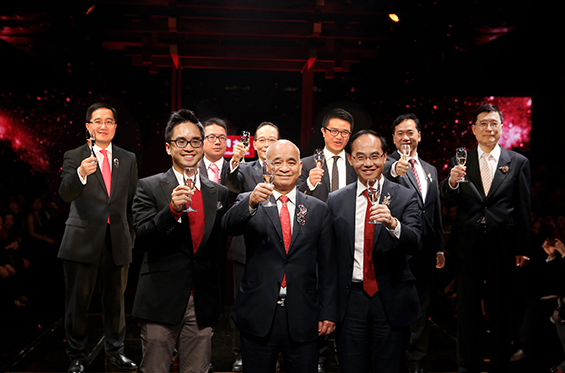 Displays design and craftsmanship with High Jewellery show and exhibition

Since announcing its anniversary festivities earlier this year, the Group has embarked upon a campaign to showcase why now, 85 years after its founding, its heritage and global vision have distinguished it worldwide. At the gala night, Chow Tai Fook exhibited a multitude of signature masterpieces that have defined its strengths and achievements in world-class design and craftsmanship. Among the masterpieces it showcased were the crossover jewellery artworks in collaboration with four of the world's jewellery industry leaders exclusively for the 85th anniversary, each interpreting a specific element of the theme of "The Red Universe." Platinum Guild International (PGI®), World Gold Council (WGC), FOREVERMARK and Rio Tinto Group each designed pieces celebrating, respectively, "Water," "Earth," Man," and "Light." Bringing together the entire collection was a final masterwork, the necklace "Fire", crafted specifically for the occasion by Hearts On Fire. In addition, the Group's one-of-a-kind for-auction jewellery art pieces from the Danseuse de Ballet, Ombre di Milano, and Reflections of Siem collections were also showcased at the event.

"Looking back on the past 85 years, Chow Tai Fook's philosophy has consistently centred on authenticity, trustworthiness, and quality – values that in these eight-plus decades have won the hearts and minds of our loyal customers across all of Greater China," said Dr. Cheng.

This April, the Group reinforced its commitment to enhancing its extensive retail business that boasts nearly 2,200 points of sale and to supporting the Group's long term sustainable development by opening a new mainland China headquarters encompassing research, production and logistics facilities, in Shenzhen. Not long after, the production of the first phase production facilities of Chow Tai Fook Jewellery Park in Wuhan was also inaugurated in September, setting it on the path to become the company's largest production and development base that will also set a new industry benchmark for jewellery production facilities when it is completed in 2019.

"What always did and still continues to make us successful are these fundamental investments in industry partnerships, customer relationships and product excellence," added Dr. Cheng. "More simply put: We aspire, in everything that we do, to achieve ‘Sincerity • Eternity.' Now, as we look forward to the next 85 years and beyond, we are confident that these values will guide us and generations to come in our relationships as a retailer, our strength as a business and our creations as a jeweller."