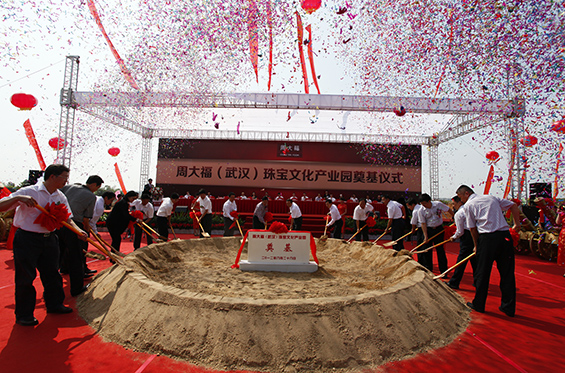 Chow Tai Fook Jewellery Park takes up an area of 600 mu. It will become the largest integrated production base of Chow Tai Fook. This integrated production and logistics centre covers a production plant, a national distribution centre, a sale exhibition and visitor centre, craft training centre, and other supporting facilities. Upon completion, it will raise production efficiency and capacity significantly and further increase the proportion of our self-produced jewellery. The Chow Tai Fook Jewellery Park is designed to meet the needs of the fast-developing jewellery retail business, and support the Group's future business growth amid the increasing market demand.

Dr. Henry Cheng, Chairman of Chow Tai Fook, said, "Since entering the Mainland China market, Chow Tai Fook has been well received by people from all walks of life. The close relationships between Chow Tai Fook and the mainland cities has not only facilitated the localisation and diversification of our business in the mainland market, but also enhanced and accelerated the industrial and infrastructural development in these partner cities. As an integral part of Central China, Wuhan offers a dominant industrial base, a strong education system and an integrated transportation hub. This affluent area provides an ideal base for the Group's unique investment perspective and development strategies. Chow Tai Fook will continue its promise of sincerity and eternity towards achieving the vision of being the most trustworthy Asian jewellery brand in the world."

Due to rapid urbanization in Mainland China, the people have become wealthier. As such, the per capita disposable income has risen significantly resulting in an increased demand for luxury goods. Chow Tai Fook believes that Mainland China could allow for even broader market development in the future. Developing the Chow Tai Fook Jewellery Park is a milestone in building the Company's strong foothold and solid foundation for sustainable development in China.

Kent Wong, Managing Director of Chow Tai Fook remarked, "Developing the Jewellery Park in Wuhan will further centralise and standardise the Group's production monitoring process, and further enhance our vertically integrated business model to provide wider range of jewellery products to our consumers. In addition, the new Mainland headquarters in Yantian, Shenzhen, which integrates operations, office and logistics, etc., commenced construction in 2011 and is expected to be operational by the end of 2013. Upon completion, the Chow Tai Fook Jewellery Park and the Shenzhen headquarters will together form a complete business value chain from the overall resources deployment to production and operations. Both facilities will fully support our long-term business development in the future."