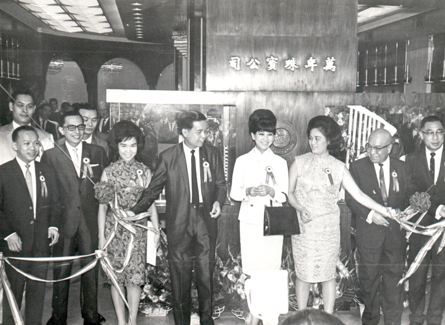 In 1929, Chow Chi-Yuen founded the first Chow Tai Fook gold jewellery store on Hongde Road in the provincial capital, Guangzhou, Mainland China, which specialised in gold jewellery. Inspired by a traditional Chinese couplet used by people to wish one another happiness and good fortune during the Lunar New Year, Chow deftly named his store “Chow Tai Fook” to invoke luck, class, and prosperity, which are the mainstays of festive greetings.

The vicissitudes of the 1930s led Chow to expand his business from Guangzhou to Macau, China, where he opened the first Chow Tai Fook gold jewellery store in the Hong Kong and Macau market in 1938. It was located on Rua das Estalagens in Macau’s historic downtown.

Within only a year, Chow Tai Fook’s business grew to become one of the top gold jewellery stores in the territory. In 1939, Chow Chi-Yuen expanded to Hong Kong, China, and opened a branch store on 148 Queen’s Road Central, at the heart of Hong Kong.

In the early 1940s, Cheng Yu-Tung started working at Chow Tai Fook’s Macau store. In 1943, he was promoted to the rank of manager and tasked with overseeing day-to-day operations. In the same year, he married Chow Tsui-Ying, the daughter of the founder Chow Chi-Yuen.

As the Second World War came to an end in 1945, the 20-year-old Cheng Yu-Tung moved to the Hong Kong store to rebuild Chow Tai Fook in the postwar years. Chow Tai Fook continually developed in the 1950s: two new stores, one in Kowloon and one in Causeway Bay, opened to serve the wider community. Chow Tai Fook also shifted its focus from Macau to the larger Hong Kong retail market. As a result, the Queen’s Road Central store was turned into the flagship store in Hong Kong and Cheng also began devising business strategies and managing operations out of the Hong Kong headquarters.